How I Nearly Repaired My Airbrush 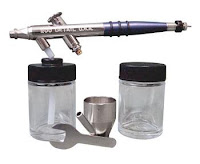 It had developed the habit of blowing air back into the paint container instead of past it1. I had effected a repair, which - it turned out - wasn't and finally, after four or five total strip-downs, and several dismantlings of the airbrush into its component parts into the bargain I was at my wits end. On the one hand I had proved beyond doubt that none of the parts I had dropped on the floor had been caught in my clothing. On the other the bally airbrush was still not working and Mrs Stevie was growling about nudity in the basement.

There was only one thing for it: I would have to refer to the exploded diagram of parts.

After this I could see that I had in fact misplaced a couple of plastic seals. It was the work of an entire afternoon to track down and buy replacements, but afterwards I was consoled by the certain knowledge that the airbrush would once again be squirting paint out of the end like it should. This was essential, since I was halfway through turning a bunch of white bits into a towering blue menace of terrification when the airbrush started to blow3 and the novelty and enthusiasm for the job was wearing off to the point it would all go into a box to languish for years until Goons Wonkshop rewrote the rules of Wonkhammer 401K (again) to make the thing unusable.

The bally airbrush was still not working, now exhibiting a bizarre pulsating spray effect that was not fit even for the rather rudimentary purpose I had in mind for it. Action Was Called For.

A mere four months later, last night in fact, I became enthused again and so I decided to get to the bottom of things. I read the troubleshooting tips and suggestions I could find and dismantled the tip looking for damage to that new seal (a prime reason for pulsing spray, I'm told). It all looked good. I put the seal in a safe place and stripped out the needle seals, but there was no obvious damage there either. I reassembled and tested but the pulsing spray was still annoyingly present. I stripped the nozzle again and dismantled it into its teenytiny component parts. Still nothing obvious. So I reassembled the tip and fitted the seal...where was the seal?

To cut a long, tedious story unsatisfyingly shorter, I hunted for about an hour for the bloody thing but it had apparently evaporated while my eyes were off it. I did not have a spare.

I was on the point of declaring the evening a total bust when I dropped the airbrush and it naturally fell point down, bending the exposed needle into a rather nice "J" shape, proving once again that things have got to get worse before they get really terrible.

I did The Bonehead Dance then extracted the useless needle from the body of the airbrush. I had a spare, which I fitted, but I decided that enough was enough and went upstairs to order a new tip from Amazon along with two of those seals. Naturally, in the intervening years the airbrush design has changed. Not much, but the exploded diagram of my model shows significant differences in the insides of the tip assembly.

I can't wait to see if the new parts will work with the old airbrush.