This Sort Of Thing Happens A Lot To Me

Policeman : Then why are you carrying two five gallon cans of regular unleaded gasoline, a box of Bengal matches, two roadside flares, a box of firelighters, a can of "Barbercrude" all-weather barbecue starter, a seven pack of Bic cigarette lighters and a Zippo?


Me: I'm going to mow my lawn, then indulge myself in a spot of outdoor cookery.

Policeman : And the flares?

Me: I'm not a slave to fashion.

Not With Both Hands, A Map And A Sign Saying “This Way To Your Own Arse”

Once again I am put in the position of having to charge three quarters of an hour of lateness to my vacation time accruals because of a "6 minute delay" on the Bloody Long Island Railroad.

Today I pulled a muscle in my right leg after a random "charlie horse" spasm that was my body showing me what it feels like to idly dangle a leg into a working combine harvester, and was running later than usual. I missed not only my 8:17 train, but also my "back-up" 8:50 train.

Which I saw dawdling across the crossing at 9:05 as I drove past it.

Something Was Up. A gang of men in orange vests was lounging around the big metal box to the right of the south-east crossing barrier, and as the incoming (late) eastbound train wandered into theater it stopped at the grade crossing so a guard could dismount the train and - I am not making this up - walk the train through the crossing.

His technique was to stroll along waving the hand behind him in a "come along" manner for all the world as though the driver had lost his nerve and needed to be talked through the sanity-blasting prospect of crossing a road. I was put in mind of the stories of the man who had to walk in front of the first automobiles with a red flag so they wouldn't exceed the (stagecoach-owner lobbied for) speed limit of 4 mph, and struck speechless by a new level of insanity on public display.

Note here that I am not suggesting that whatever danger was posed to the train did not require a man-with-wavy-hand walk it through the crossing. I am suggesting that there were four men and a man supervisor standing doing apparently nothing who might reasonably have been lined up before the train, arms linked in a line of train protection, and done the job properly.

Once this piece of surrealist theater was over and the barrier had lifted I dug out my iPad and went fishing for the reason behind it all. Apparently the trains were doing this because the barriers at Wyandanch were broken.

What glaringly wasn't explained was why this lethally dangerous (to trains) railway grade crossing required a wavy-armed man when going east, but just an eagle-eyed driver when going west.

But that isn't what has me once again enraged at the pig-uselessness of the Bloody Long Island Railroad. What has me flirting with a coronary infarction is that the train to Penn Station was "only 6 minutes late" but the Bloody Long Island Railroad felt that the onslaught of trains into and out of the obviously badly congested Atlantic Terminal meant that they didn't hold the connecting train to Brooklyn and so "only 6 minutes" turned into 36 minutes.

This alone makes me want a train dispatcher in front of me, barefoot and tied to a chair so I can explain matters with a lump hammer the same way Kris Kristorfersen did to Mel Gibson in the remake of Payback.

I am sick of this nonsense. Only two days ago they pulled the same stupid fbleeping stunt with an earlier train.

And why do they do this? Is it because Atlantic Terminal is so choc-a-block with trains that the merest hint of a delay will cause massive disruption to the crowds of people attempting to get into (or out of) Brooklyn? Lets go to the Bloody Long Island Railroad schedule.

First the outbound, east-going trains struggling to get past the slew of inbound traffic: 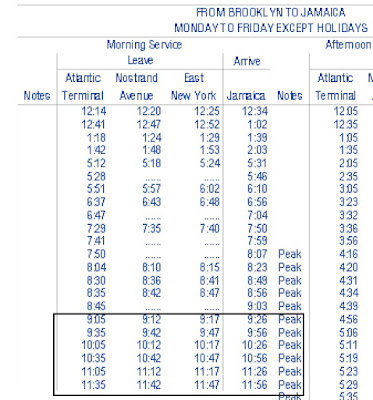 The thing to note here is the puzzling "one train every half hour" aspect of the Jamaica-bound traffic (the relevant part I've outlined in black). Now it is true that Atlantic Terminal only has six tracks, and that the route to Jamaica reduces this to two for most of the journey. But still, the Bloody Long Island Railroad had announced no problems with those two tracks and so we must assume that the Jamaica-bound Atlantic Terminal-originating trains were only coming along once in a blue moon as designed by whatever idiot puts together the Bloody Long Island Railroad schedules.

The answer must lie in the hugely inconvenient number of trains trying to cram into Atlantic Terminal. My connection had been let go because another train was imminently about to ram it from behind as its driver frantically tried to avoid the train behind his (or hers; the Bloody Long Island Railroad has lady engine drivers too, and I feel just as strongly that they shouldn't be forced to drive trains on such dangerously overcrowded routes). Let's go to the schedule: 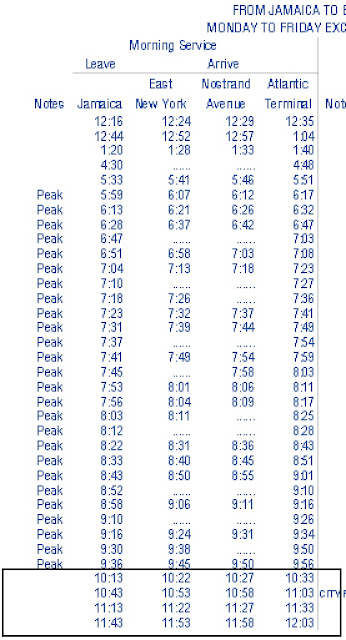 I think the thing to note here crucial to understanding the problem is that at the time I need to make my connection (outlined, again, in black) there is one Brooklyn-bound train every thirty fbleeping minutes. The only congestion that would cause the speedy dispatch of the Brooklyn train when a sizable number of its expected passenger load is being held prisoner about half a mile up the track is the congestion in what passes for the fbleeping dispatcher's brain.

And so we finally get to the nub of the matter; the Bloody Long Island Railroad are, to put it mildly, being run at every level by fbleeptards.