I had thought for some while that it was time that Bil-the-Canadian and the Steviedad had other things to do than get sozzled, zoned, blitzed, deranged and disabled by alcohol together.

Not that I don't think Bil-the-Canadian earns his drink when he gets it. The Steviesis makes his life a constant blur of activity on the spacious, tree-and-bear infested grounds of the Parental Manse, and the Steviedad enjoys kicking back with Bil-the-Canadian after the latter has spent all day putting in a deck or fighting dead trees and live bears with a weedwhacker fitted with a brush-cutting blade or re-roofing the garage or whatever the Steviesis has demanded as tribute this time. But the Steviedad and Bil-the-Canadian have both been told to cut down on the weedwhacking so I sought for and found an excuse for them to enjoy each other's company without danger to life and limb.

I found it in the shape of the minature helicopters I discovered when Mrs Stevie gave me one at Xmas.

These things, specifically the Syma model 107G, are ready-to-fly after 40 minutes or so charging, and are so user-friendly that almost from the first flight they provide ten minutes of enjoyable Big Kid fun. They are miracles of technical innovation, using tiny brushless motors to power the contra-rotating twin co-axial rotors and the tail rotor. Really clever design too.

A traditional full-sized helicopter usually has one rotor for vertical lift and directional thrust and a smaller tail rotor mounted on a boom to fight the tendency of the whole craft to spin in the opposite direction to the main rotor1. You rotate left or right ("yaw") by increasing or decreasing the pitch on the tail rotor (or if you are in a Chinook you increase the pitch on the rear rotor I guess), until you are pointing the way you want to go, and you do this with foot pedals usually. You get lift by increasing the so-called "collective pitch" of the main rotor - the angle at which the blades meet the air in other words - usually by pulling on a handbrake-like affair and at the same time twisting the handle to increase the motor power because, just like dropping a clutch in a car, as the blade digs into the air it needs more power to turn it.

You go backwards, forwards or any-way-you-like-wards by making the pitch of the main rotor change, biting more air on the side opposite the direction of travel, using the cyclic stick - what most people would mis-label a joystick. The rotor disc3 then swings freely to tilt in the direction of travel and the helicopter moves. The whole business requires constant correction by the pilot as the helicopter will tend to swing to line up with the rotor disc and the blades will lose lift on one side as forward speed picks up and gain it on the other and all sorts of other real-world silliness gets in the way of the exhilaration.

Models of this arrangement are available and have been since the early seventies4, but they were hard to fly until the advent of on-board gyroscopic servo motors to correct small fluctuations in behaviour. Such models tend to be large, several feet long, and powered by small glowplug engines. Not suitable for indoor use unless the operator is suicidally5 brave or stupid.

The miniature helicopters such as the Syma 107G are electrically powered and use a rather different arrangement.

For a start, there are two main rotors, mounted co-axially 6 one above the other, each driven in opposite direction to the other by a dedicated electric motor through a ferocious overdrive7 gear train.

This means that when you power up the helicopter it will lift vertically with no tendency to spin, because the torque-cancellation is a mechanical by-product of spinning the rotors in different directions.

You turn the helicopter to point in different directions by slightly reducing the speed of one or the other rotors, producing a net differential torque which turns the little machine eerily smoothly in the air. The effect is robotic and hypnotic.

To move laterally you start the tail rotor, powered by a third motor and pointing not sideways as in a traditional helicopter, but up8. This produces a force either up or down on the tail which tilts the helicopter and the rotors in the direction you want it to go and the resulting thrust makes the helicopter move that way.

To stop the helicopter falling out of the air the upper rotor has a rather brilliant centrifugally-controlled mechanism that alters the variable pitch of the blades to counter the tilt and keep it pointing more or less at the ground and thereby provide vertical thrust. This self-correcting device is so clever I can hardly speak about it, and the upshot is the tiny helicopter is very stable in the air and very responsive to the commends it gets from the twin-stick control box. The left stick controls yaw direction when moved side-to-side and lateral movement when pushed forward or pulled back. This isn't like a cyclic stick at all. The right stick controls lift.

I had so much fun with mine that I thought I would give the Steviedad and Bil-the-Canadian one apiece. Not only would they get to fly them together, the Parental Manse features a huge airspace living room in which the machines could really show their stuff. 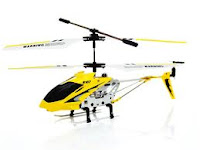 Mrs Stevie got into the spirit of things by obtaining a rather nice black helicopter c/w spycam and switchable lights for him, but I vetoed this on the grounds it was too hard to fly and the flight time was too short and I wasn't giving it back. No, the Syma 107G would be the helicopter I took to Canada when I went, and I purchased a blue one for Bil-the-Canadian and a yellow one for the Steviedad, which I flight tested, obtained a replacement for the yellow one on the grounds the flight time was very short9 and declared a new era in VTOL fun and games. Well, there was a problem to be solved, but a New Era was just around the corner.

The problem was that the controllers supplied with the helicopters did not feature the spring-loaded vertical lift stick, a feature I deemed essential for quick assimilation of the piloting technique and a positive safeguard in the event of a crash. About the only way you can damage these machines without a hammer is to keep the power on after they crash. With a spring-loaded lift control, all you need learn is to take your thumb off the stick when crashing. Easy.

So I located and bough two replacement controllers, thereby solving nothing because they were clearly rebuilt units and had nasty scuffs and scratches all over them.

So I stripped them down and took the circuit board and sticks from the replacements and put hem in the case with the trimmings from the original controllers. Which required I do a bit of cutting and filing down of internal lugs because the case in the old unit would not accommodate the stick mechanism from the new unit.

By the time I had two working, spring-loaded controllers in my lap10 I was not so sure this plan was as brilliant as I had at first believed it to be.

Next, I discovered that the boxes for the helicopters would not fit into my carry-on luggage, and that because they featured permanently-mounted batteries I couldn't put them in checked baggage, so it was off to the workshop to fabricate boxes from pink insulation foam. The plan was looking more and more like I should've ditched it from the get-go.

Eventually it was done and everything was packed.

Once in Canada I presented the Steviedad and Bil-the-Cabnadian with their prizes to general puzzlement. Oh well.

The Steviedad eventually tried his out a few days later after I took my little Chinook11 for a trip round their living room (no-one can watch one of these in the air without being fascinated by the sight) and he was astounded by the ease with which he could fly it once he actually tried. He did crash it into his head he first time which caused mockery from the assembled womenfolk, but I understood that it was because he, chartered engineer that he is, wanted to get a close look at the whirling gubbins in action and then got an attack of "mirror control panic"12.

He was nervous about crashing but I assured him before I turned in that night that it was almost impossible to break them and I had taken the precaution of including a kit of replacement parts for those bits most likely to get damaged in a truly impressive crash. All he had to do was avoid the old noggin and he couldn't, I told him condescendingly, break it

The next day he asked me if I could fix it because he had broken it.

I don't know how, but one of the gears had slipped out of alignment inside the body and one of the vertical lift rotors wouldn't turn as a result. I quickly discovered the problem (the machines are so simple inside it is easy to diagnose any problems that arise) but it required me to fully dismantle the machine to fix it. To this day I have no idea how that gear, which was snug on its axle, could have slipped the quarter of an inch it needed to move to disengage from the rest of the cogs. I suspect the Steviedad did it to be annoying.

Luckily the Steviedad has a tool supply second only to my own and in a trice I had the little yellow helicopter zooming above their terrified cats - I never saw such scaredy-cat cats in my life as these moggies.

And the New Era was once again dawning for all to see, with the possible exception of the cats who ceded the field and left for the safety of the recreation room and kitchen.