Canada - The Rest Of It

So, I hear you asking, what happened in Canada?

Well, not much, really. We spent most of the time shuttling between the various family, a few places we wanted to see and my dad's hospital bed until the wedding on Saturday. The shuttling was done with Mrs Stevie at the wheel of the mighty Ford Leviathan Supa-Kab Turbo-X, which served to alleviate most of her rage for the duration of the vacation. Such was her joy in the earth-mover-sized truck that she rarely paused to drink coffee (the chief cause of her short temper in my opinion).

One weird event that left us scratching our heads involved The Stevieling's addiction to Animé Merchandise. We visited a small store in the old town high street (the town has grown and spread since this charming row of businesses was the center of commerce) where she purchased a couple of items and I bought a couple more for her. A couple of days later we went back so she could pick up another item she'd been on the fence about, only to discover the store completely stripped to the walls. No hint of a change of venue was given when we were there the first time. A classic fly-by-night.

I was sorry to note that one of the small bookshops had closed since my last visit. It was an old-style bookshop where I could pick up really old secondhand SF paperbacks from the sixties, and it had a prominent Canadian Author section too where I once scored a really, really good detective mystery set in Quebec. These authors don't get much if any exposure outside of Canada itself so I was hoping to do a couple of hours browsing in that section. Oh well. 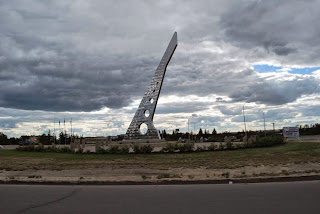 The Wedding was coming along apace despite the Forces of Evil arrayed in good order trying to stop it happening. Everything that could go Eddorian Hellfruit-shaped did. The venue had to be changed in a welter of mendacity on the part of the renter that cost the happy-if-it-kills-us couple a grand and a half, That in turn screwed up the catering and the music and I don't know what all else in a cascade failure the likes of which left the East Coast dark for days. Eventually it was held in Centre 2000, a V-shaped building with a circular hall used by various town organizations for ad-hoc1 functions and which serves as a visitor center. It is really cool, with an observation dome that looks out over Muskoseepi Park and it has a ginormous moondial in front of it.

What it doesn't have in any sort of profusion is power outlets.

This meant that the couple, who had negotiated the Rapids of Panic and cruised into the headwaters of What-the-Fbleep had to get creative. They retained the services of a local Beer'n'Pool pub for the food, which was delicious, and roped a local up-and-coming Reggae band into providing the Excellent Ents™. It was memorable, and they were radiant as a Newlywed Couple In A World Truly Gone Mad. If there is any justice in the universe they have a big lottery win coming for the torrential rain of needlessly annoying crap they weathered with smiles for all.

The wedding ceremony itself had been held in the open air in a park we had driven past about two trillion times and never noticed. It was really sunny, if a tad windy. Nowhere on the order of the mini-hurricane that made such a fiasco of the candle lighting ceremony at BiL the Elder's wedding but it carried the sound away from me so I couldn't hear some of the vows.

Didn't matter of course. The vows are for each other, no-one else, and I had done the whole thing myself once so had first-hand knowledge of the sorts of things being said.

Mrs Stevie said it was kinda fun watching someone start out on The Great Adventure, and without thinking I said it was more like a Grim Reminder of the Hell to Come, and then she said some very harsh things and called me vile names, but luckily the wind carried them away from the happy couple who were too busy watching each other to see the demeaning scuffle off in the wings.

At the reception, during one of the band's numbers, the conga player shyly approached my sister and asked about the dark haired girl in green. She fixed him with her very best lizard stare and said "you mean my Niece?" and he retreated at speed. It was worth the trip to see that happen. I told the Stevieling she should dance with him and have some fun but she scowled at me and said "I'm seeing Charles, Dad!" in her best imitation of her mother. I pointed out that Charles was about forty-five hundred miles away and I certainly wasn't suggesting anything other than a couple of dances at a wedding on account of me not being in the mood to have to punch anyone (thereby getting punched back several times if history serves as a lesson), but she went thin-lipped and sent me off to sit with the Old People.

Since these were people who in some cases had been influential in building the town we were sitting in, I actually felt this was a good thing. The Steviesis has a raft of Very Important People in her circle, indeed is a Very Important Person in her own right. I can't get enough of the stories some of the people who come to her parties can tell. 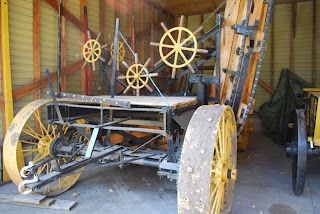 For example, we had gone out to the Muskoseepi Park Village Restoration Museum Thing and I had seen a humongous horse-drawn machine that had been there for years but was now being restored, and which turned out to be a horse-drawn grader. I never knew they had such things. When it became apparent I was really interested in the thing an ancient guy was called from what he was doing and asked to talk about it, and as he had been a driver of one about sixty years before he had a lot to tell. Well, turns out one of the Steviesis's good friends was not only an Extremely Important Person but had also driven one of these things in his long and checkered past. I was enthralled by his stories of how it all worked, how the teams were assembled (hired from local farmers), the sheer mechanics of making roads in the great prairie during the very harsh weather they can get. I told him he should get this all down on paper, write a book, at the very least tell someone at the restoration his story so it would become part of the larger tapestry.

Then I got sad for a bit because I've been trying to get my dad to do the very same thing for over a decade and he won't. His head is full of unique memories of the hardship people suffered while trying to restart the English industrial base in the post-war years, when the infrastructure was still in tatters and there was no money to fix it up. Hell, I remember seeing bomb sites all around and that would have been in the very late 1950s. There was no money to clear the debris and rebuild.

The kids were married and we were due to fly out two days later. We visited the happy couple in their new house the next day. They were rattling around with a collection of Star Wars and Batman themed memorabilia but only a bed and a table as furniture. It made me smile to remember what it was like to have no need for anything else, and they have so many great plans for what they want to do it made my head spin. I hope they get it all and then some. 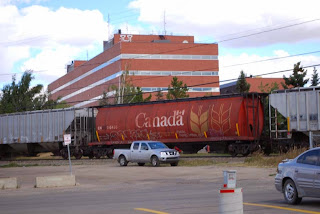 One neat thing was that on the way home I finally got to see and photograph a train of grain cars, though they were a sad, dilapidated collection, lacking the majesty of their clean, well-maintained look of only, what, three years before. Pfft. 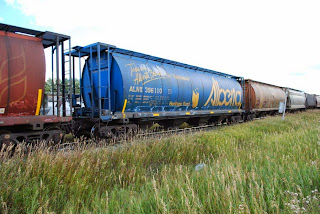 Then, of course, it was time for fate to kick me in the hurtybits. I went down to the hotel computer suite to arrange our tickets home. Everything was going well until I entered my address, at which point the whole website became hostile and refused to allow me to check in. Mrs Stevie called me an idiot a few times and then drove us to the airport where I tried to check in at a desk, but the nice man told me he couldn't do advance check-ins. He did show me to a machine and showed me how to use it to do what I wanted, only it also took one look at my passport and refused to cooperate. At this, the nice man scowled at me and became more distant. Clearly I was a security risk. So we went back to the hotel. 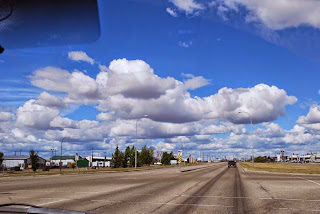 Later we drove over to the rental place and returned the Ford Leviathan Supa-Kab Turbo-X, where Mrs Stevie became extremely emotional and had to be taken for a nice cup of coffee to steady her nerves. For weeks afterward she would sigh and shed a tear before climbing into her Shuttlecraft-sized people-mover, her normal mode of transport and formerly a source of great satisfaction to her (something about being higher up than everyone else, but I wasn't really listening when she explained the attraction of the thing after she bought it).

Mr Steviesis blew me away when he insisted on getting up in the middle of the night to drive us to the airport the next day. I tried to tell him not to, but he insisted. It was so early that Tim Horton's was not open so he couldn't get a cup of coffee, poor bugger. On the plus side, neither could Mrs Stevie. At the airport we encountered yet more problems checking in and I told Mrs Stevie that she should perhaps plan on traveling with the Stevieling and I'd follow later when I'd resolved whatever it was. However, she saw through this ploy almost immediately and bullied one of the staff until they figured out how to turn off the snotty switch on the software, and I was able to be cleared for the return flight back to where I came from under the watchful eyes of the women of Chateau Stevie.

We said our goodbyes, removed our shoes and prepared for battle with customs and immigration. It started well when the jar of Saskatoon Preserves in my suitcase triggered the x-ray alarm, and got steadily worse as the day wore away.

As for the flight, the less said the better. It had its ups and downs.

Arriving in New York we walked out of the terminal building to be hit in the face with the atmospheric equivalent of a moist armpit and the eardrums with Snothausen's Symphony For Airhorns and Ableeps.