The Saga Of The Jewelry Case Comes To An End 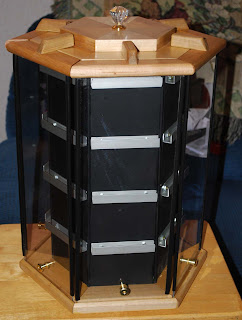 I have finally completed the repairs on the Jewelry Display Case of Extreme Time-Wasting and Expense.

I said I'd have a go at making this thing after a friend who sells pewter statues, chess sets and jewelry, broke his rotating triangular case o' jewelry displayage by bashing and smashing it for a few years. Since it was made of Perspex, it just about disintegrated. He asked me as I passed his booth at I-Con one year if I could fix it, and I said no1, but that I might be able to make him a new one.

I dithered for about two years and came up with a hexagonal design (the issue was not the shape2, that was 5 minutes worth of overheating brains, smoking hair and so on) but how to realize that shape in the footprint required to house a reasonable number of the little display cards the jewelry comes fastened to.

These cards hang from a metal hook-shaped clip fashioned into the top of each card, which engaged in a slot in the original display case. I thought that six columns of two cards, six high would work. I had one of the cards (I had though far enough into the process while I spoke with my friend to realize the need for one) and so it was a matter of simple arithmetic to figure out the dimensions of the hexagonal prism required to do the job. The problem was that no-one makes hardwood in such dimensions that the hexagonal base and top could be simply made from two planks, and if they did I could never afford to buy it given the rarity of hardwood in general - I had decided to go with maple for the construction as I could work it easier than I could oak and it would be hard enough when finished to withstand a fair degree of bashing and smashing without getting dinged-up.

I finally had the required brainwave and figured out that if I made the core prism out of MDF (a sort of hardboard) and used small lengths of aluminum channel bolted to these panels as hooks for the cards to hang on, I didn't need the base to be solid. It could be annular (ring-shaped). The top could also be made annular, and the hole could be covered up by a second, smaller hexagon of wood. So that's what I did. The whole thing was held together by a threaded truss rod joining the top to the base.

The finished object was, if I say so myself, a thing of beauty and I presented it to him at I-Con four years ago.

The next year he gave it back. He had stored it for a year in an unheated garage lockup and the top had cracked through due to thermal creep and, I suspected, an over-tightened truss rod. I told him I'd repair it and return it, but the top ended up needing to be completely re-fabricated and during that process my drill press died and my router self-destructed, so it wasn't ready. The next year Mrs Stevie was ill and I had no thought for woodworking. So this year, four years after I originally made the thing, I finally am able to re-present it with the proviso that if he stores it in a garage and it cracks I want nothing more to do with the wretched thing.

It was quite a struggle to get the damned thing built too.

The original was clearly not properly assembled, so I resolved to make the joints more accurately this time. The best accuracy I could get in tests on the Miter Saw was about 1/3 a degree per cut, which translated into an accumulated error of about three degrees over the entire ring, meaning it was a spiral with either an overlap at the final joint or a gap. Experiments with my new table sanding machine could not improve on the error in the time I had, so I went cheap 'n' cheerful and decided to make two half-hexagon rings, then machine each half-hex to match the other. This would result in a slightly irregular hexagon, but I was getting fed up with the whole thing by then and didn't care.

The crowning hexagon was machined as six triangles, and was glued down to the hexagonal ring, centering it as best I could.

I took some precautions to avoid Splitting Top Syndrome while I was at it. The lack of biscuit joints, dovetails, tenons or whatever meant that the joints could easily fail as they had before (I had used biscuits3 in the previous design, but they let go). I considered using metal plates screwed over each joint, but that would only hold one side of the joint and allow expansion stresses to build up and twist the top apart again.

Then I had what I hope was a better idea. I machined an extra slot in the ring and the crown, sank some screws in the slot, leaving the heads proud, and poured quick-setting Alumilite liquid plastic resin5 into the slot. Now each hexagonal piece has an integral O-ring holding the joints together.

The goodies on display are kept safe from the light-fingered by six Lucite windows that engage in a slot in the base and have a top piece made of wood that has a pin which engages in a hole in the top of the case. The original design was a bit too fiddly when it came to hooking up the windows after a sale, so I added knobs to the bottom of each window fabricated out of the flat-top screw bolts used to hold Swedish furniture together.

but there are two minor gotchas that have me grinding my teeth.

First, I forgot that in transit the windows need securing and managed to construct the top with no regard for the clip-on hardboard "transit disc" that held everything together on the original. Fixing that requires dismantling the whole thing, a non-trivial operation at this stage in the game, so that has to be worked around with rubber bands.

Second, sometime between me giving my friend the case and my finishing it yesterday, the windows gat marked up. I was very careful to store them in wrappings, but I can't say for sure they got scratched in a damp garage as opposed to my basement. Most of the marks could be polished out with a polishing compound and some elbow grease, but I haven't the time or the inclination. I can replace the windows for about 20 bux and a weekend's work (and about two weeks recovery from the wrist strain cutting Lucite with a special scoring knife will cause) but I'm unwilling to invest more cash in this project. It has already cost north of 100 bux and enough is enough.

I am almost as glad to be rid of this albatross as I was to get shot of Bil the Elder's G4.