The Rain In Wyandanch Stays Mainly On The Carpark 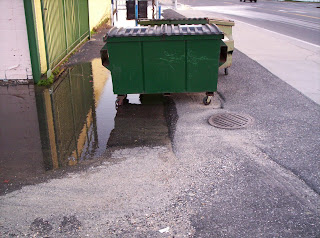 So I shall use the relatively new Blogger feature that allows me to upload pictures to this blog without an account with a third party web-host and a degree in computer science to demonstrate that I do not "make this stuff up" as certain people have recently been hinting.

The picture appearing above (hopefully) is of the place the rain should have gone over the last week, during which the Western Hemisphere's entire supply of rain for spring was erroneously delivered to my address all in one go over the course of three soggy days and nights.

Luckily, the Wyandanch civil engineers realized that a gentle flow of water sluicing over the various cracked curbstones, potholes and ill-laid tarmac that make up the North-East carpark complex would be just the thing to raise commuter spirits dampened during the previous week, and arranged for the carpark to become a massive shallow reservoir that should take another three to four days to drain dry by the stunning expedient of placing half the drains halfway up the various hills and slopes that make up the local topology.

The pool depicted wraps around a small complex of shops and restaurants, none of which can use their rear entrances owing to between 3 and six inches of water pooling round the entire mall. As you can see, their is a very nice, large, clean drain within a couple of feet of this lake, but as it lies a good foot above inland sea level it is of no use in reducing the amount of wet lying in square yards all over the place. In a stroke of genius, the elevation of the drain exceeds that of each and every doorstep by at least six inches, so maximum fun was extracted from the inclement weather and many of the establishments are still trying to dry out.

And they say there's no more greatness in the world.