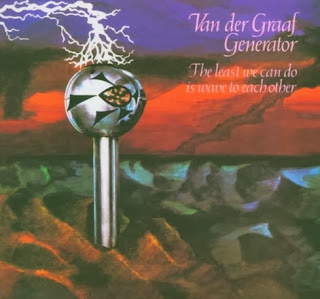 The Least We Can Do Is Wave To Each Other by Van der Graaf Generator.

This album first saw the little round rubber mats of the turntables of the UK sometime in early 1970 if I remember right.

The mix features some odd choices, such as putting the vocal in one speaker only and the sax in the other in "Darkness" for example, which emphasized the then-new and novel Stereophonic effect but sounds less than optimal in headphones. I'm surprised the remixer didn't allow just a little bleed into the other channels so the voice and sax would blend properly into the stereo panorama.

What we have here is arty prog rock by people who could play the paint off their instruments, made in a time almost before prog rock was an actual genre.

I saw VdGG at UEA, on the Godbluff tour in 1975 (I think). The image of David Jackson prowling the stage playing two saxophones at the same time (for the hook in "Darkness") is vivid decades later.

Because money was always short in them days the only VdGG album I owned then was a compilation called 68-71, which commands a ridiculous price on Amazon these days - if you can find one - and hasn't at the time of writing been published as a CD.

I caught an article in the press two days ago that led to looking for an actual Van der Graaf generator (a machine for making static electricity) and thence to the Amazon listings for the album above (along with a couple of others.) and a wallow during my commute today in some music history I largely missed the first time around.